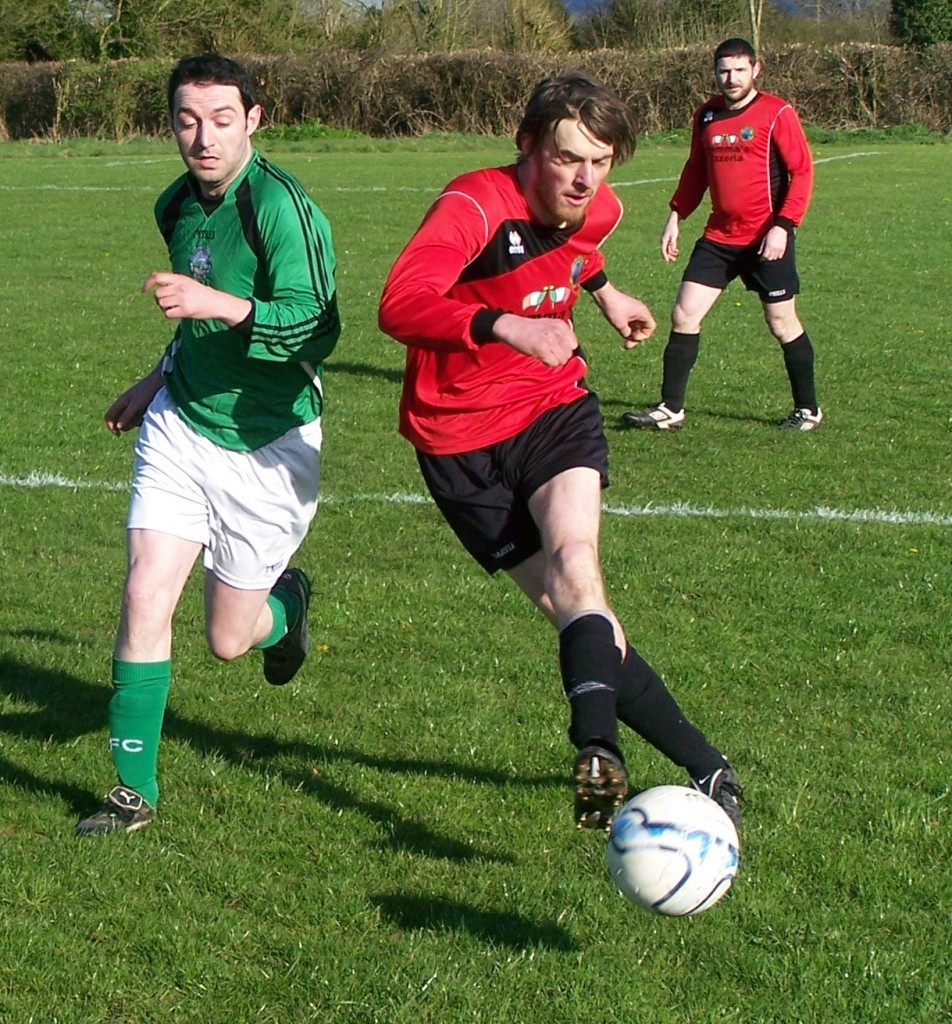 on and it looked early on as if a one sided affair would ensue after the Glenbane side made a flying start. Ballymackey keeper Tony Delaney gathered from a John Fogarty free kick in the first minute and then the Ballymackey custodian was in the action again two minutes later after saving from JoJo O’Meara. The Holycross onslaught assisted by a cross field win continued and the opener came in the 7th minute when good play from Mike Carr on the right flank set JoJo O‘Meara through on goal who made no mistake with a low drive to the corner of the net from just inside the edge of the eighteen yard box. Mike Carr continued to impress and set up Matt Vahey on the ten minute mark, however the deft touch was wide of the mark. It was two nil to Thomas Dwan’s side in the 11th minute after Michael Lee got on the end of John Fogarty’s free kick to head between the posts. Ballymackey’s first real attack came moments later when Alan Kenneally’s free kick was headed on target by Willie Seymour, however Eamon Flanagan was able to make the block. It might have been game, set and match midway through the half when John Fogarty’s free kick was flicked on by Michael Lee before Willie Dillon’s effort was touched on to the Ballymackey cross bar by Tony Delaney to keep the game alive. The Ballinree side counter attacked as Alan Sweeney got forward to drive over Eamon Spillane’s goal. Ballymackey continued to work their way back in to the game and Kevin Mounsey hit wide thirteen minutes before the break. Indeed, the red and blacks had claims for a penalty waved on when John Fogarty appeared to handle in the box following good pressure from Rory Mounsey and Kevin Mounsey. The Ballymackey net minder had a more than busy opening half and was adjudged to have encroached outside the box with ball in hand eight minutes to the half time whistle, however Tony Delaney well recovered after getting down to make a fine save from Conor Ryan’s free kick and then the last action of the half saw Michael Haverty latching on to Alan Kenneally’s free kick with the headed effort not far away. Ballymackey 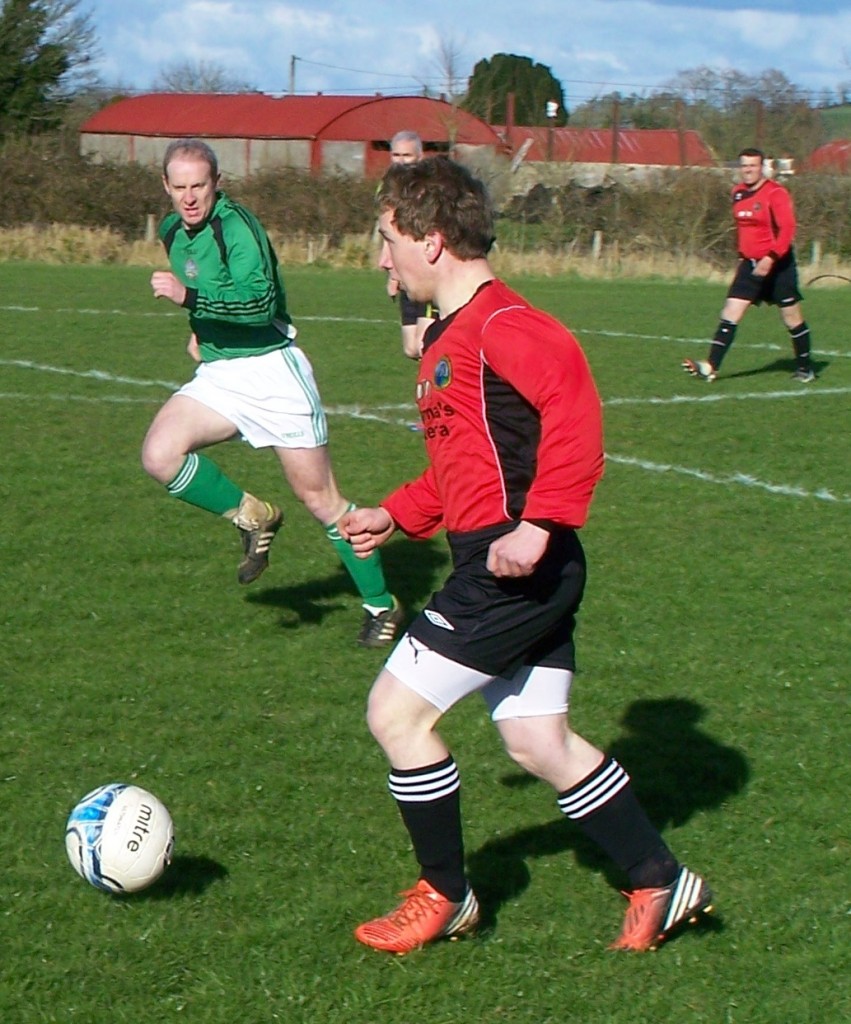 assisted by wind advantage in the second period played the better football for long spells and in truth deserved to come out on top at the end of ninety minutes based on their second half display, although it was the Glenbane side that made the better start when Ogie O’Meara made a telling challenge two minutes in and then Mike Carr linked up with JoJo O’Meara who forced the save out of Tony Delaney. The Ballinree side more or less took over after this and brought is back to the minimum on 51 minutes when Alan Kenneally’s free kick was dispatched in to the danger area where Willie Seymour got the last touch to prod over the line. Holycross reacted somewhat with a John Fogarty free kick which was smothered by Tony Delaney. The League winners were on the back foot and penalty claims for a handball infringement from Ballymackey went unheard on the hour mark and then seconds later Alan Kenneally’s dead ball delivery was fired over by Kevin Mounsey. Thomas Dwan sprung the changes introducing James Shanahan and Thomas Comerford which was to prove fruitful in the end. Gary McCarthy’s corner kick was cleared following a goalmouth scramble which was followed with a free kick from Gary McCarthy which was met by Kevin Mounsey, the headed effort was on target however Holycross cleared off the line. Holycross might have pinched the win on 81 minutes as James Shanahan combined with Thomas Comerford on the left before the latter let fly, the Ballinree keeper reacted well to parry as JoJo O’Meara followed through only to see his low effort strike the butt of the goalpost. The Anthony Kenneally managed side netted a deserved equalizer in the 83rd minute when Alan Kenneally’s free kick from out on the left was glanced to the back of the net with a Kevin Mounsey header for a fine finish. A hectic finish saw Tony Delaney advance to thwart James Shanahan four minutes from time while seconds later Conor Ryan’s free kick was fumbled in the goalmouth before Michael Lee scooped wide and then Holycross had the ball in net but the effort was disallowed. Ballymackey applied all the pressure in the dying moments, Willie Seymour’s dipping shot was held by the Holycross custodian and then Alan Kenneally’s overhead kick wad parried at the expense of a corner kick. Willie Seymour then bundled the ball between the Holycross posts in the second minute of injury time, however the celebrations were cut short as the goal was disallowed for a handball infringement despite strong protestations from the Ballymackey camp. The first half of extra time was a tame enough affair, although Ballymackey were the more creative. The second period was only 25 seconds old when Holycross pounced for the match winner after the ball was put through to Thomas Comerford on the left flank who advanced on goal before unleashing a low drive which nestled in the far corner of the net aided by a slight deflection. Ballymackey were deflated after this but battled heroically get back on par but failed to snatch the equalizer their efforts deserved. It as a cruel loss for the Ballinree side who had dug deep to work their way back in to the game against the odds and were truly unlucky in the end. Holycross ‘B’ were jubilant at the final whistle after clinching a first League and Cup double for the Glenbane Club and stuck to their task throughout especially in the second half making key substitutions when the game was slipping from their reach. A jubilant Holycross captain JoJo O’Meara accepted the Fast Food Cup from NT&DL Chairman Mike Young to complete a trio of NT&DL titles season to date for Holycross FC 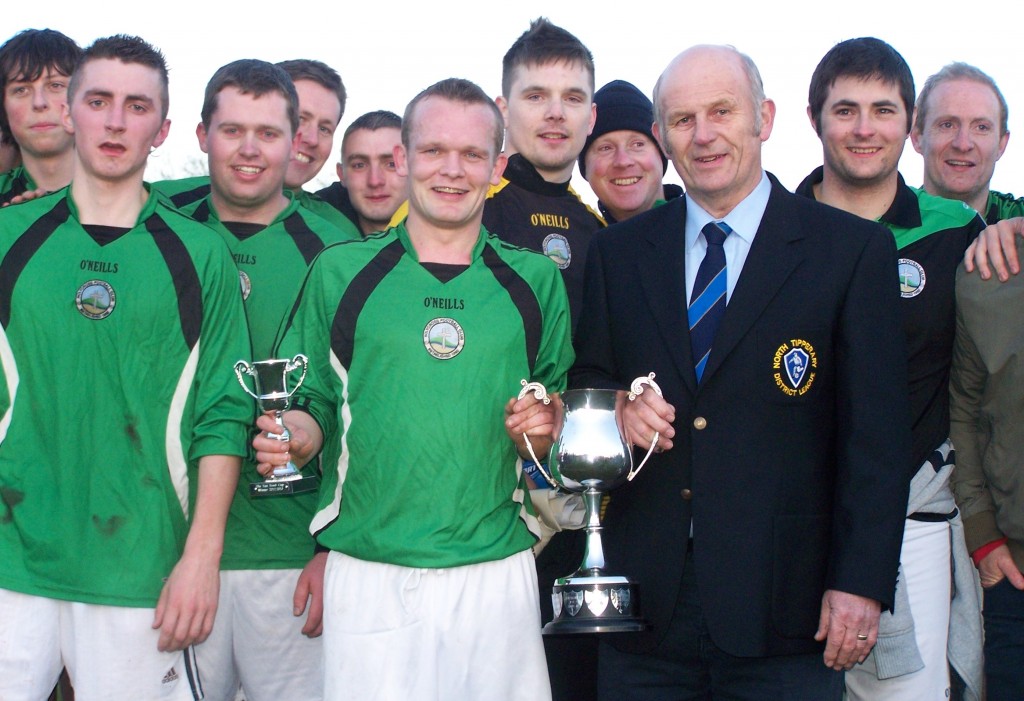 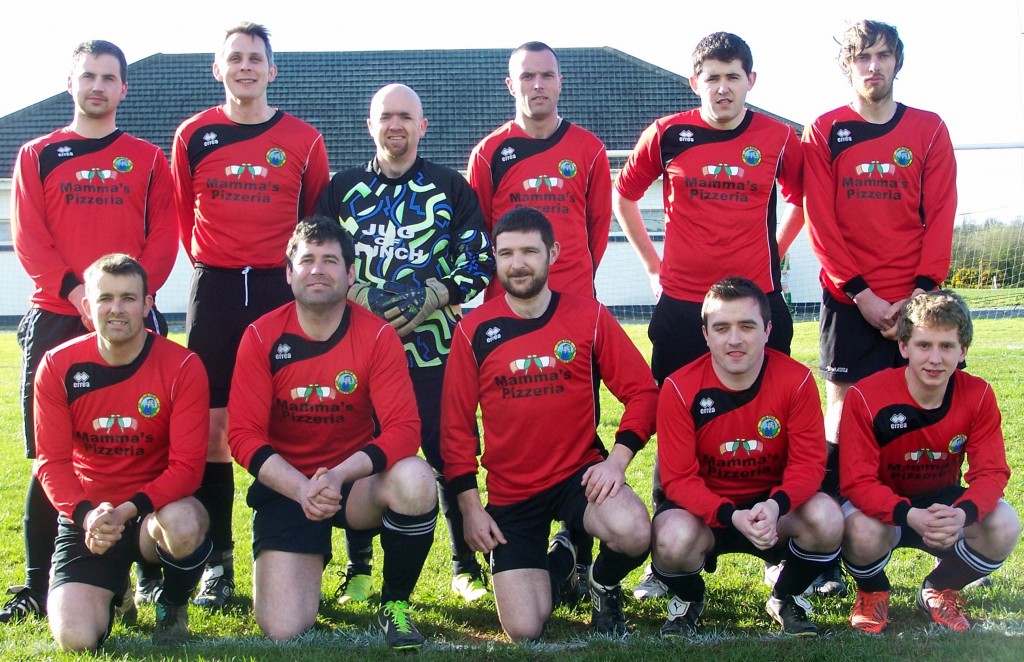 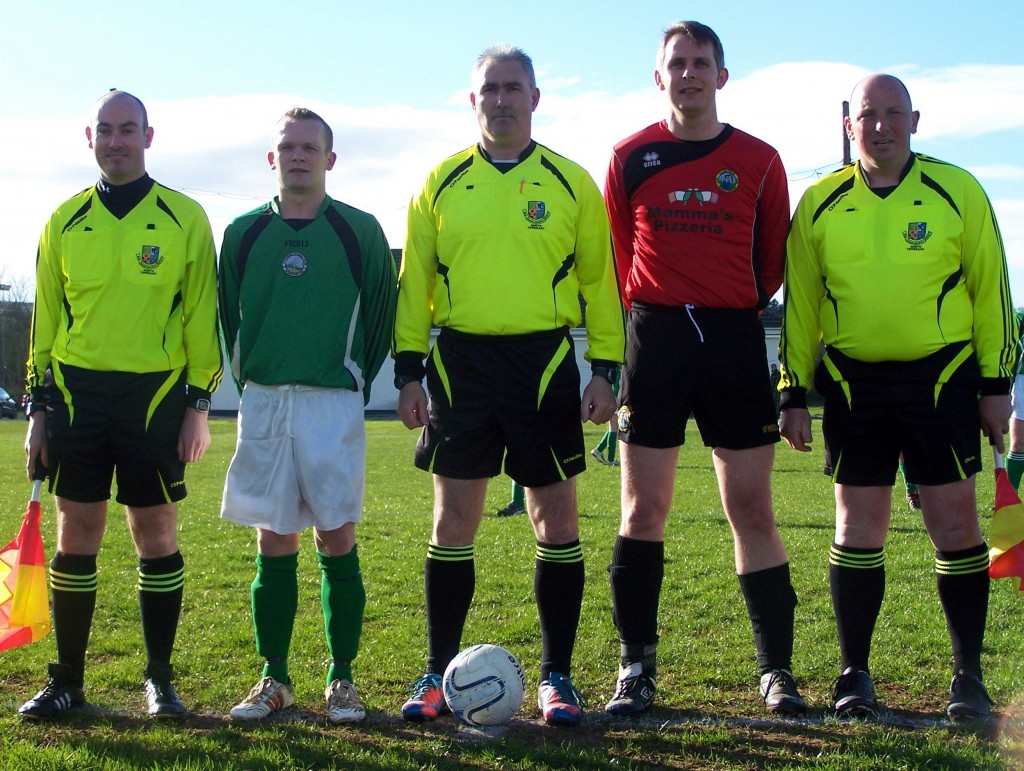 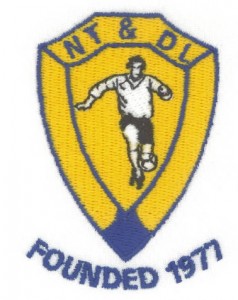