Cloughjordan ‘B’ emerged victorious over Gurtagarry following a penalty shootout in an entertaining Third Division Shield Final played in blustery conditions at a resplendent Ballinree venue on Saturday afternoon. Gurtagarry will be somewhat disappointed to have let a two goal lead slip but turned in a gallant performance on the day and were luckless when it mattered most. Cloughjordan won the toss and opted to play against the wind in the opening period showing the early prowess, however Gurtagarry started to get on top as the half wore on and edged ahead on 22 minutes when James Ryan got on the end of a corner kick to finish between the posts. Gurtagarry continued on the ascendancy and stretched it two on the half hour mark after Ronnie Kinane’s well taken free kick went all the way to the net. The Seamus Farrell sponsored side continued to press with the assistance of a strong wind, however the elusive third goal didn’t materialize before the half time whistle. Cloughjordan burst out of the traps after the resumption scoring direct from the tip off when good play involving Dean O’Meara, Andy Brennan and Eoin Killackey saw Dean O’Meara finish off the move with a superb goal with just ten seconds gone. It was all square midway through the first half after Thomas Williams came off the bench to get on the end of Dean O’Meara’s long throw to head past Gurtagarry custodian Paudie Bourke. Gurtagarry picked it up after this and it was end to end for the remainder of the tie and then Gurtagarry were denied in the 87th minute when the ball was cleared off the line following a goalmouth scramble. The sides were still locked on a two all score line at the full time whistle, so it was down to the dreaded penalty shootout to decide the outcome where the Thomas Killackey managed side proved the more clinical converting four on the trot through Richard King, Conor Deane, Thomas Williams and Dean O’Meara while Kieran Brislane, Nicky Ryan and Luke Ryan replied for Gurtagarry. Cloughjordan goalkeeper Anthony Whelan turned the tide in favour of the champions elect after getting a hand to Gurtagarry’s fourth to deflect the ball on to the cross bar. Eoin Killackey then stepped up to bang home the winning penalty to clinch a memorable victory for the Cloughjordan Club with more silverware on the horizon before the season is out with Cloughjordan ‘A’ still in contention for all three top tier NT&DL competitions. Best for Cloughjordan ‘B’ on the day were Jack Farrell, Dean O’Meara and Jamie Twamley while Ger Ryan, Conor Maxwell and Ronnie Kinane shone for a youthful Gurtagarry side who will re-group and come back as strong contenders for Third Division League honours next season. NT&DL Chairman Mike Young presented the Third Division Shield Trophy to winning captain James Feighery who accepted the accolade on behalf of a gallant Cloughjordan team. 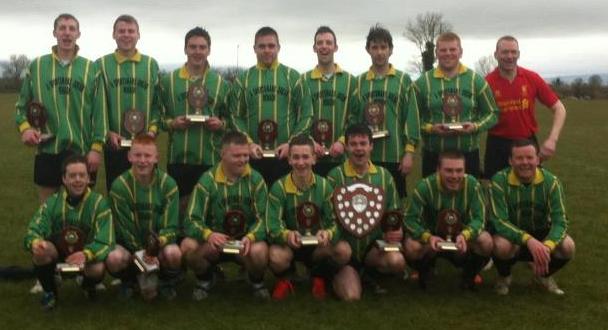